I always thought that soy sauce would be pretty much keto friendly. I didn’t seem to think of it as having anything beyond soy sauce. But they usually have both wheat and sugar in the ingredients list (yes you can imagine a shocked emoji face right here!)

I went to my local Chinese grocery shop (and admittedly I’m spoiled for choice!) and perused their soy sauce set, and checked the back of the label for both ingredients and carbohydrate numbers. I only took a few photos as it was a bit overwhelming but will do a round two if anyone is interested and I need to do a more comprehensive check!

There are two main soy sauces I use – a “light” soy (normal soy) and a “dark” soy sauce. The dark soy sauce I tend to use to add a darker richer flavour and colour and is used for “red” braised cooking. Since my mum is Shanghainese this is a common thing! For those who are interested I also tend to have “Maggi” sauce (more later on this magical elixir) and Worcestershire sauce in my pantry too. I don’t tend to use too much of any of these so my bottles are usually super old and they don’t go off so they are good to just keep around.

It happens that I was running low on both the light and dark soy sauces so a good opportunity for me to check into the grocery store and see what they had and buy some if appropriate. In the end I was quite surprised at the options I bought. 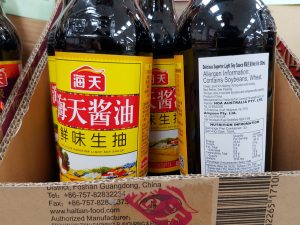 With any soy sauce, there is always a bit of concern as to where the sauce is made. There is a fear that anything from mainland China could be counterfeit or contaminated however I was on the hunt for something as keto friendly as possible so I was going to check:

The Amoy brand was on special so I checked there first and ended up picking up a bottle of the Dark Soy Sauce (Gold Label). When I got home I found my outgoing dark soy was also an Amoy brand but the formulation or testing must have changed over time as the carb count changed from 7.9g to 8.0g per 100mL.  Sugar is also less than 1g per 100mL. Not too bad. 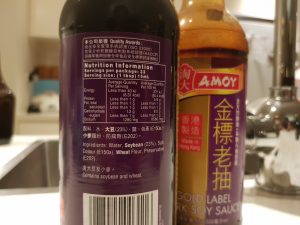 Amoy is made in Hong Kong.

I was happy with this as it was something I was obviously already using and it had no sugar in the ingredients and I would imagine Wheat Flour was a fairly small amount given the order of ingredients.

Light soy was more interesting as I wandered through the store with one bottle, then setting that down when I found a better one. It was like I was back in the day of selecting a video or DVD to watch at a rental store!

There were a couple with very suspect ingredients so I put those back on the shelf. As you can see from the photo above of the “Delicious Superior Light Soy Sauce” it included MSG and Wheat and Wheat Flour! (Together wheat made up about 7% of the ingredients… against water… so I figured it was one to miss for our purposes).

The real surprises is that Wheat… may be ok for some people like me and when it comes to Maggi sauce!  Maggi sauce or Maggi seasoning is very ‘fragrant’ as we like to say. I remember days when I was a kid and would have Maggi sauce with eggs or just on white rice. (OK stop thinking about the rice peeps! Concentrate on the eggs!)

Maggi seasoning – could be OK for Keto

So I’m being controversial I’m sure especially since I’ve dissed that other brand for having things like MSG and now I’m talking about Maggi seasoning (yes I’m hypocritical), but I’m going to say it’s OK.  I am not as extreme as people like Dave Asprey or a lot of ketoians out there who have probably thrown out their microwave ovens and every spec of ‘suspect’ ingredient. I still believe in living a little and don’t want to live forever. So if you do want to live forever and don’t want to risk Maggi that is your call. However I did find that it was surprisingly low in carbs! So it’s in my pantry. 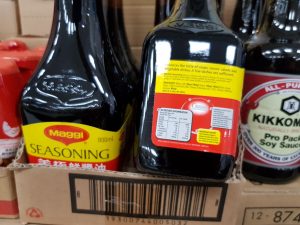 The carbohydrates in Maggi seasoning for 100mL is only 3.9g. And 2.8g of sugars. It does have a lot of “suspect” ingredients so if you are worried please do not use Maggi seasoning! And use coconut aminos or some other substitute.

Flavour enhancers 627 and 631 are not MSG but are flavours which could be made from meat or sardines.

This bottle of Maggi seasoning is made in China.

I bought it anyway as I’m only going to live once. It could be my last time so I’ll let you know how I go once I start using it. My old bottle – I suspect I’ve had it for over 5 years! – is also Made in China and I’m down to my last bit so I think it’s ok…

Light Soy for every day cooking

My main choice for light soy sauce from this shopping trip is Kikkoman. I was again very surprised but this time for the size of the bottle. Not that it’s that huge considering I have bought bigger bottles again for cooking with, but my last bottle of light soy was only 500mL and this time the Kikkoman bottle is 1.6L! 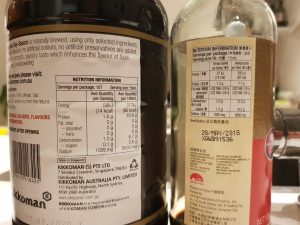 The difference is significant when the old bottle I had at home has 13g per 100mL and the Kikkoman has 6.7g per 100mL. The new bottle is pretty much half! And a drop from 10.2g of sugar to 0.6g. So score that as a win for a better selection. When a strict keto diet calls for 20g net carbs every little bit will help.

Ingredients include: Water, Soybeans, Wheat and Salt. Also has some alcohol from the brewing process.

This particular bottle of Kikkoman was made in Singapore. 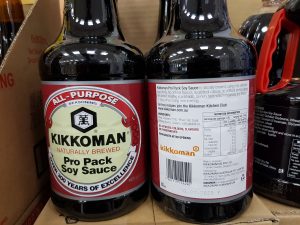 The soy sauce options for Keto4Asians 2019

So for me, I’ll be using these soy sauces for the year (it will likely last me at least that long!) and are what I will consider keto friendly soy sauces. 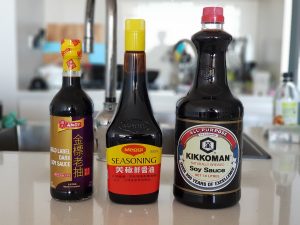 I thought people may be interested in what I paid for my soy sauce.