My review of No Shu Donuts

I’ve never been a fan of doughnuts (donuts).  These donuts (I really don’t understand why it’s a do-nut or a dough-nut.  I think it’s should be a cake-with-a-hole or a short-cylinder or a not-whole) are more cake like than doughnut like.  Not necessarily a bad thing! 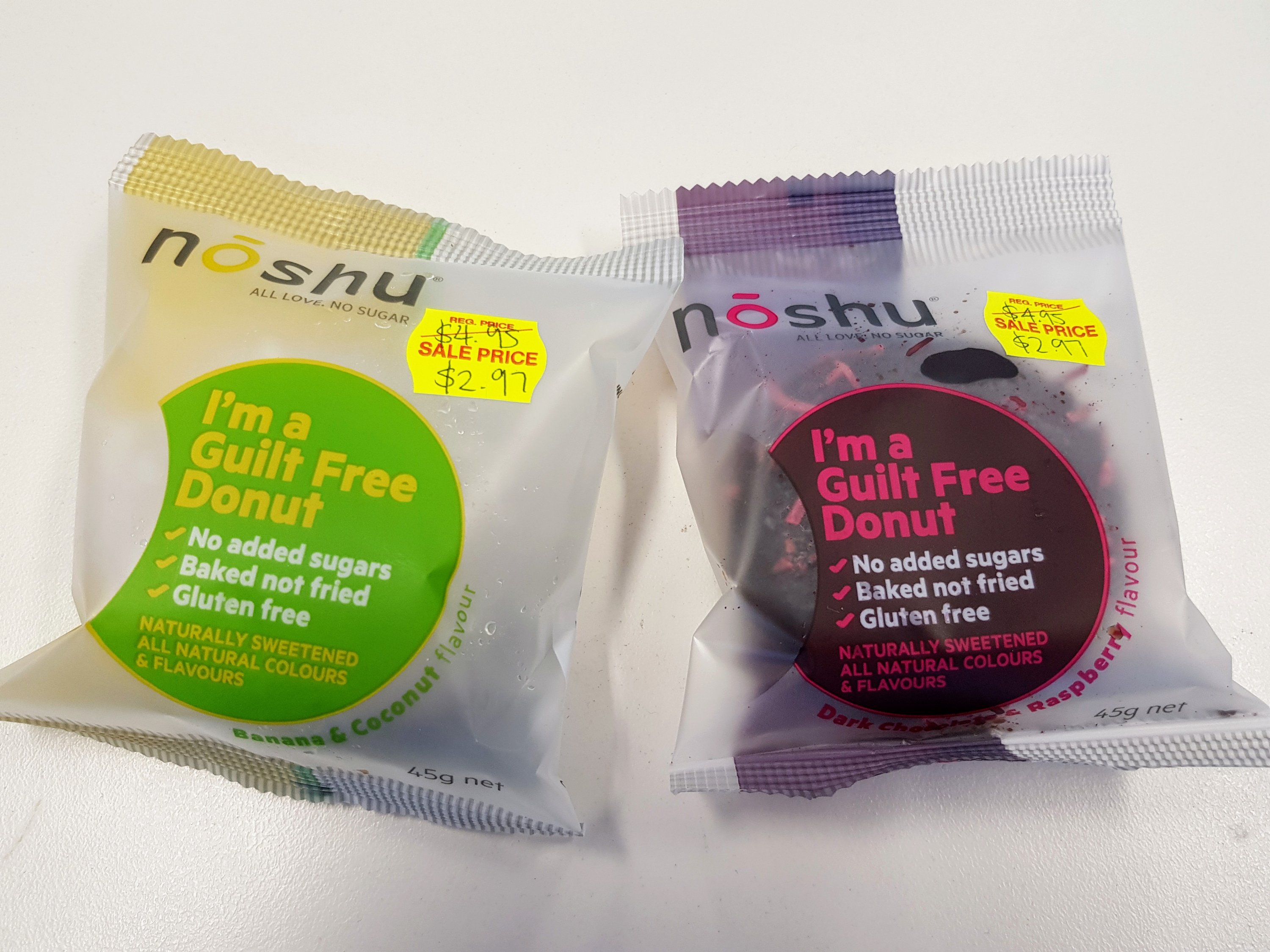 I bought these treats for a colleague and myself as were are both “doing keto”.  It was also on special!  I had one before at the full price but at this bargain price I thought I would just have to get a couple. They are stored in the fridge of any stockists if you are looking for them.  I’ve been told you can find them in some Woolworths but the ones I bought were from Healthy Life in World Square (Sydney CBD area). 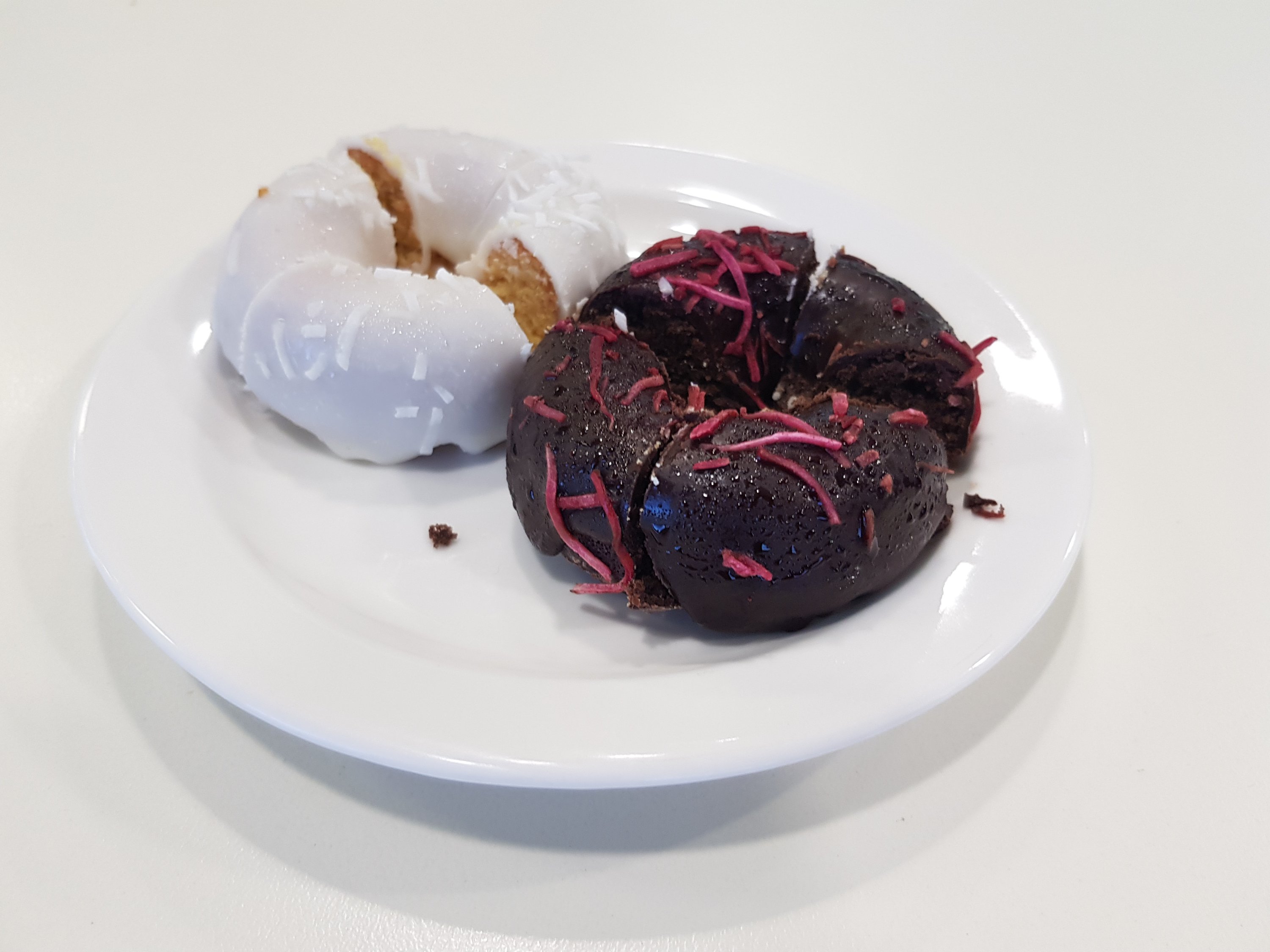 Usually these are $5.  Sounds expensive and yes they are.  But when you are doing keto you really have so few options for ‘off the shelf’ treats that these are well priced so you don’t go for it for the empty carbs but are within reach for when you really crave something.  In this case due to the close expiry date I got them for a bargain of $2.97!

The two flavours we tried were the Dark Chocolate and Raspberry Noshu donut and the Banana and Coconut Noshu donut.  (The only other one I’ve tried was the Caramel Spice Noshu donut.) 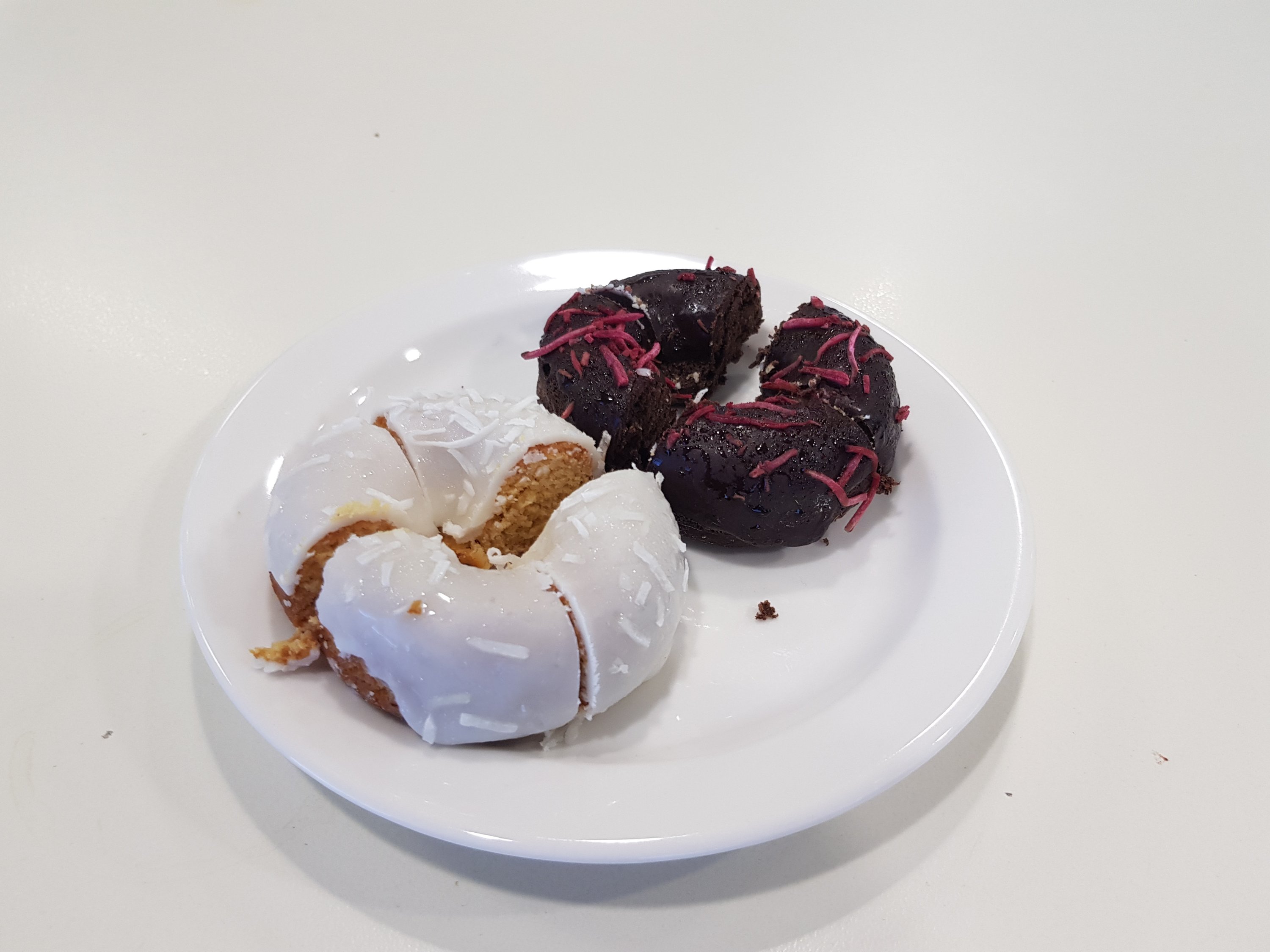 In order for us to try both I cut them up into quarters.  Keep in mind these are pretty small doughnuts.  Well not really small, but smaller than what you are probably imagining when I say “donut”.  I ended up having 3/4 as I doughnated (see what I did there?) to a colleague who was watching me cut it up.  While that particular colleague isn’t keto he was still watching his weight and had had these before as it was within his calorie budget. 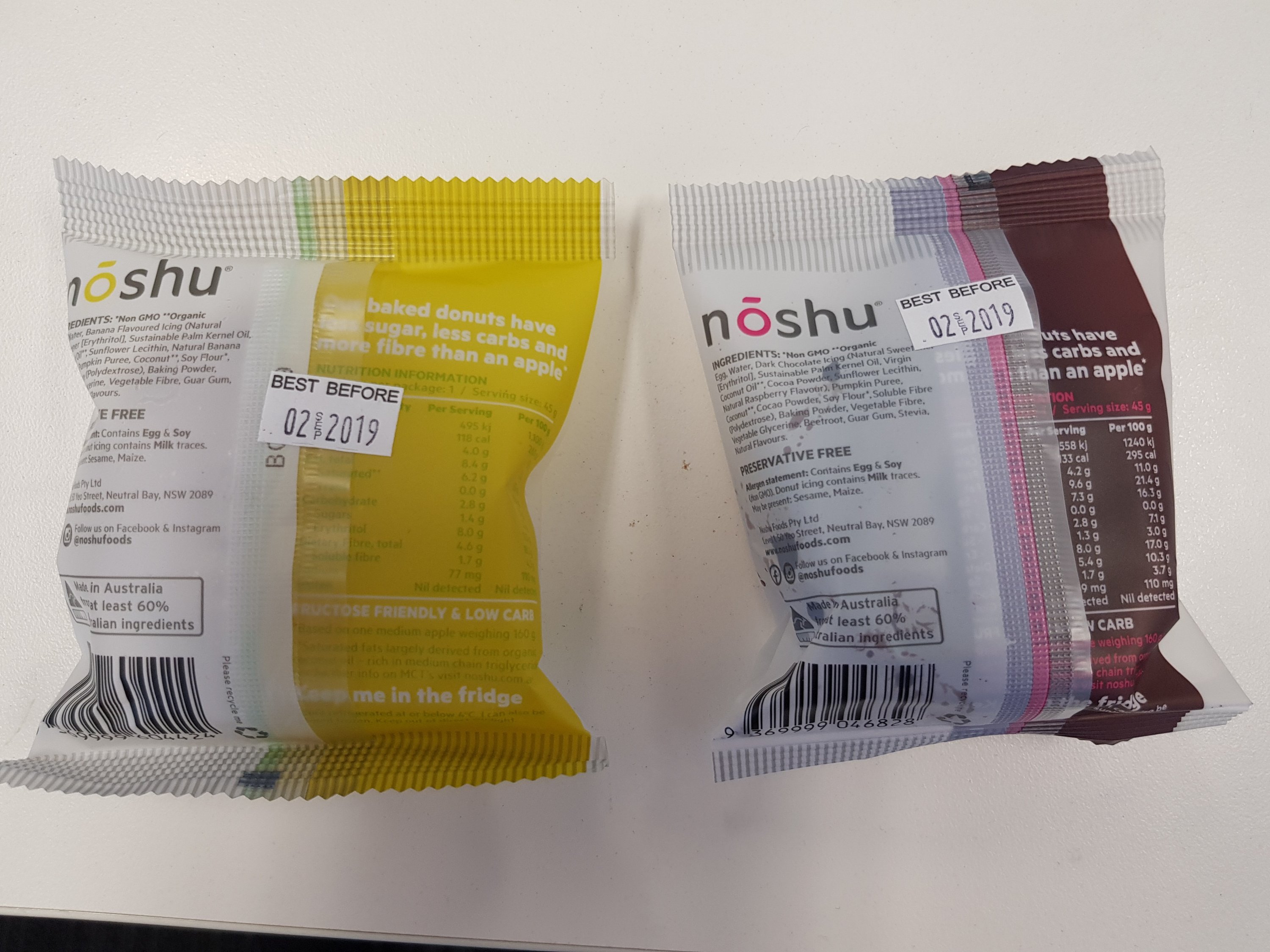 The great thing (other than the taste!) are the ingredients.  It’s low carb at 2.8g per pack and has ‘good’ ingredients including erythritol and stevia as the sweetener.  It’s also made in Australia.

These taste great!  Great work Noshu!  They don’t taste ‘fake’ in terms of the sweetener, the texture is great although more cake than doughnut — maybe because they are baked and not fried.  It’s not super light and fluffy but for a cake this size is more like a good cupcake texture.  I am not usually a fan of icing but these taste great the way they are.

The Dark Chocolate and Raspberry is more chocolately than raspberry.  It was like a mudcake texture.

The Banana and Coconut is more banana flavoured and like a banana cake (as opposed to a banana bread… which I still have very fond memories of!).

I think generally they didn’t need the extra flavour profile and a “Chocolate” and “Banana” version would have been fine without the sidekicks but maybe the other flavours were needed to enhance the primary flavour.

Definitely buy these if you want a cake experience.  Don’t buy them if you are expecting a doughnut.  I’ve also seen you can heat them up but I quite like it chilled (they are stored in the fridge after all!)  With a nice cup of tea or coffee this really is a treat.  Especially since you don’t need to bake it yourself.  Chocolate vs Banana?  Last time I chose the Banana.  Let me know in the comments if you have tried it and your favourite flavour.  I’d just be interested in finding out.

Each doughnut (donut) is only around 140 calories and around 2.8g of carbohydrates (the flavours differ in calories and carbs).  Yes Noshu donuts are keto!  And that’s a good thing.