Most of the keto recipes and documentation and YouTube videos are for Caucasian men in the USA.  Obviously there are other channels and blogs out there which cater for different needs.  There are some sites and influencers for women, some for over 40s, some for the UK and some for Australians.

I just happen to be scratching my own itch.  I live in Sydney, Australia and happen to be of Chinese background and have been ketoing since December 2018.

So this page is just to indicate what the key differences are from the normal keto content that is out on the internet.

And yes it’s all about the food! 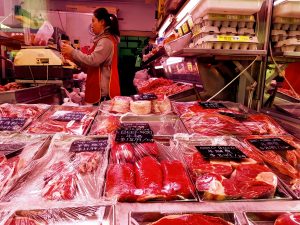 Did you know if you say “meat” in Chinese (肉, ròu), by default it means pork.  Chinese people generally eat everything from nose to tail.  Especially for pork!  You may have seen Chinese BBQ shops where there are roast ducks, roast pork and chickens hanging in them.  Most of this is keto friendly.  In these shops are also other options that are sold by weight such as pigs ears, pigs snouts, pig intestines and beef tendons.  I’m not sure if it’s the frugality but we do tend to eat ‘everything’.  One of the key things I love at Yum Cha is the beef “bits”.  This is probably the most keto friendly option at Yum Cha!  It has beef intestines, beef lung as well as other bits which I’m hard pressed to identify but I have it anyway :).  It is usually served with Chinese turnip (蘿蔔) which is also relatively OK for keto diets even though it’s a root vegetable (4-5g per 100g of turnip is carbohydrates).

Generally Asian cuisine includes a lot of fat.  And at home we always cooked with rendered chicken or pork fat that we would have kept when cooking various foods or when we had excess chicken fat.  I often have a small bowl with a lid next to my stove top which is rendered fat.  And using a ‘chunk’ of fat (not rendered) is good to grease up a pan.  Just using a pair of chopsticks to move the chunk of fat around works well.

Fish is similar.  Steamed fish is very popular in Cantonese cuisine but the key difference is that we tend to eat whole fish.  Which means it includes the skin and the head of the fish.  One of my favourite meals is grilled salmon head.  Fish and seafood is very popular with things like pipis and abalone and lobster and crab often featured in restaurant meals.  We also use dried shrimp or scallops in cooking and for some reason is often considered vegan in Chinese terms (which it obviously is not).

Seaweed in many forms is often also used in a variety of ways from appetisers to being added to soups.  Japanese cuisine obviously uses a lot of seaweed and there are many keto sushi recipes out there (using cauliflower rice as the rice part).

Eggs.  Yes we eat fried eggs.  Even “purse” fried eggs (which is just a fried egg which is half flipped over.)  One of the famous egg dishes has to be the steamed water egg.

We also love different types of eggs. Not just chicken eggs.  (🤔 Strangely enough while we have “meat” meaning pork, we actually specify that eggs are “chicken eggs”.)   Quail eggs and duck eggs are the most popular after chicken eggs.

Salted duck egg and century eggs are also acquired tastes.  Salted duck egg is yum and can be used to coat things or cook with minced pork for some yum keto diet meals.  Century eggs with tofu and shallots is a good cold appetiser and a good option for a non meat, non vegetable option.  Some cultures also eat balut but because I haven’t tried it and can’t imagine trying it I won’t go into it here.

Eggs can be quite versatile and there are egg dumplings that are made for a Chinese New Year meal in my family.

Hmmm the difference is type of poultry.  Chicken is the obvious option but duck and goose as well as quail and pigeon also are part of the Asian diet.  We don’t tend to be able to get goose here in Australia much but duck is fairly easy to get.  One of my favourite meals is roast goose or roast duck.

Being plant based is not a problem for Asians.  Meat is often just a part of the meal with most of the food being plant based.  It’s only with me being brought up in the West and also having lived through more prosperous times that we have been eating a lot more meat than a standard Asian or Chinese diet.

Soy milk, soy beans (dried or fresh) and tofu are very common foods.  Soy milk generally isn’t keto friendly.  Based on my calculations on home made unsweetened soy milk, it should work out to be about 4g of carbs per 250mL serve.  So potentially can fit it into a keto diet.  I haven’t bothered as it’s not something I need but wanted to put the option out there.  Also there is much that talks about keto and the general harmfulness of soy such as this article.  It’s so ingrained in me and I haven’t felt the effects of soy so have continued to consume soy products and you will find them included in my meals and options.

Soy beans are sometimes added to soup (aka Bone Broth!) or eaten ‘fresh’ as edamame or in stir fries.  It’s a “sometimes” food for me.  The main thing I do eat that is made from soy is tofu.

Tofu comes in all different guises and I like most of them! Especially fried tofu!  I love adding it to braised food or just frying it up on it’s own.  So keto police, I respect your opinions but in this case I choose tofu.

Soy Sauce (and other condiments)

I also use soy sauce.  I have sought out the most keto friendly soy sauce possible (from a carbs point of view).  Dark soy and light soy are a staple for me and most foods are marinated or cooked from a base of soy sauce.

I don’t tend to use much MSG ever but that’s a hang up from the past although my Mum gave me a ‘left over’ bit of a bag when I moved out and I still have it in my cupboard and have used about a sprinkle per year – maybe.  Fish sauce is also something I don’t use much of.  I haven’t worked out how to replace things like hoisin sauce or oyster sauce but I just don’t cook with them these days.  Soy sauce is the solution to most of it.  And for a thickener I’ve used a mix of coconut flour or xanthum gum.

And whilst talking about controversial food items I arrive at gluten.  It’s not something I eat a lot of but many vegans will know, Chinese and Asians can do wonders with gluten from mock duck to just gluten cubes!  It’s also known as seitan.  I just like the gluten balls that I can put in a stew or soup dish.  And I’ve been known to cook with gluten flour when I want to coat something for crunch.  I also plan to try and do a couple of dishes with gluten as I want to make spring onion (scallion) pancakes.  It’s not something I have often and pre-keto I would often feel bloated when eating flour based products so not sure if it’s the gluten or the flour or just eating carbs, but it’s not something I plan to eating a lot of.

As an aside, I find it fascinating that so many people travel to France or Italy who have a gluten intolerance and are fine eating bread and pasta there.  What the heck have we don’t to our food supplies in Australia and the US?  (and other places!) 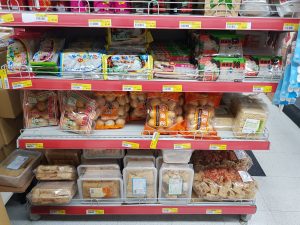 I love vegetables.  And I have a belief that Asians love vegetables.  Just because I do 🙂  I also love fruit which as a ketoian I probably shouldn’t.  I’m hopeful that I’ll move into a carb cycling protocol and include some of my favourite fruit from time to time. 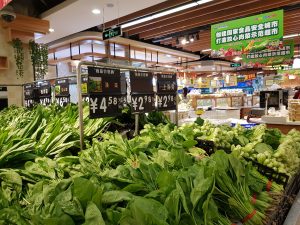 Asian Greens!  Gotta love them.  And I do.  My favourite has to be bok choy – I know it as “Shanghai Bok Choy” as the other bok choy is the white stemmed version.  Followed by A choy (A菜 or celtuce).  Oh and kang kong (morning glory) or tong choy.

Some other Asian greens you may like/love:

Other vegetables and edibles

There are those who love cassava or taro or jicama.  I’m not one of them.  Nor do I even love potatoes which most people can’t believe.  I do like lotus root but don’t miss it.  Bamboo shoots are almost root vegetables.  I do like those but they can be stinky and also I don’t tend to incorporate it into my cooking.  I use to have some chilli oil bamboo shoots which are very “rice downing” but since I don’t have rice… well… I just don’t have it anymore.

So the key thing for the sake of this blog is going to be daikon radish/turnip I think.

In way of differences, I think the only addition to normal fruit is the use of goji berries in soups and even desserts.  But rarely.  I use to have it in a soup we nicknamed “wake up” soup.  It was named that due to my poor Chinese and the way I understood the term for Alertness or Attention or Energy was “wake up”.  But it was a clear chicken stock/soup with goji berries and dried Chinese yam.  The soup is similar to this recipe.

Dragonfruit, lychees, longan are other fruits which are typically Asian but are all not keto friendly – unfortunately!

There are obviously berries which generally are OK but there is no difference there from a Western or Asian keto point of view!

Traditionally we don’t tend to do much dairy.  In fact many Asians are lactose intolerant.  So you won’t see much in the reference of cream or cheese in Asian cooking.  Rather we use coconut milk and coconut cream in South East Asian cuisine.  (Not so common in Chinese cooking).

Rice and sticky rice!  Vermicelli (glass noodles), Rice Noodles, Noodles (wheat based), Dumplings, flat breads, cornflour.  Unfortunately all unketo foods.  I’m not a big ‘replacer’ of these foods and rather just eat vegetables if the main dishes are “rice downing”.

I have bought konjac noodles and eaten it for various things but don’t feel like I really need that replacement but find the noodles fairly easily in Asian grocery stores.  I’ve even made a wat dan hor out of them!