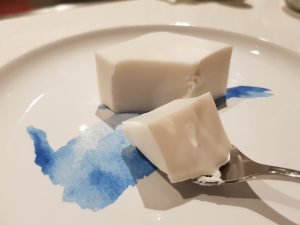 Next time I want to make this with more exciting moulds.  I’ve made this dessert before with agar agar for a vegan friend of mine but I do prefer the texture and consistency of gelatin.  This recipe is with gelatin and coconut cream.

If I get around to making another batch with agar agar I will post up the recipe so we can have the vegan version of keto coconut cream jelly!

You may have seen this very Asian dessert at your local yum cha (dim sim) restaurant.  It usually looks like cubes of whiteness stacked up together.  The consistency is less like jelly as you may have had from an Aeroplane Jelly packet and more like a pudding.

The recipe is very forgiving. The only issue you may have is with the coconut cream separating, so I suggest you stir and stir some more when heating up the mixture. Change up the type of milk you use, the quantity of milk or cream — it’s my type of recipe!

In many yum cha places you will have seen or eaten coconut jelly. It's pure white squareness is very appealing.  For a dessert this is great and the added bonus is the gelatin.  In this recipe I make a keto version of coconut jelly.
Prep Time10 mins
Cook Time10 mins
Total Time4 hrs
Course: Dessert
Cuisine: Chinese
Keyword: jelly
Servings: 12 serves
Calories: 76kcal
Author: Yvonne Lee