No Cheesecake?  Fixing it stat!

So to rectify it I thought I’d try another recipe and document it this time! And voila one of my best cheesecake recipes ever!  Baked cheesecake with less fuss. You can bake it and eat it on the same day (normal baked cheesecakes I like to leave overnight). The trick is to make them mini. In a cupcake format.

Each cupcake with or without ganache topping is 3g of carbohydrates (carbs).  You can always make it crustless as well which will reduce the carbs and calories more!

The recipe makes for slightly sweet and fluffy cheesecakes – which is my perfect cheesecake.

A light fluffy low carb and keto friendly cheesecake in a small (portioned controlled!) cupcake format. The biscuit base is optional. Some of my batch had a base (9 of the cupcakes) and the other 5 didn't and were a different size... Recipe makes 14 cupcakes. YMMV.
Prep Time20 mins
Cook Time35 mins
Course: Dessert, Snack
Cuisine: American
Keyword: afternoon tea, cake, cheesecake, cupcake, gluten free
Servings: 14

I shared my baking efforts with family, neighbours and friends and it was a hit!  I think they all wonder about the serving size but for me it’s perfect!

The addition of the ganache was an afterthought and is great for covering any cracks in the cheesecake!  I think it really adds something to the cake even though the cheesecake filling itself is very yummy.  The different textures and flavours with the almond crust, filling and chocolate top are fantastic. 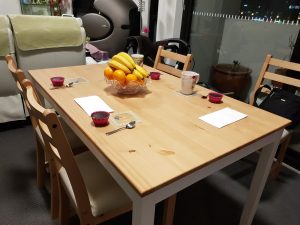 I just built (assembled) the dining room chairs and tables (thanks IKEA) for my mum on Friday night and decided to do a test run with the dessert after a scrummy dinner out having things as amazing as salted egg yolk fish skin (see my review of a packaged version of the Irwin’s salted egg yolk fish skin) and veges with lots of mushrooms. I enjoyed the appetizer of salted fried peanuts too. 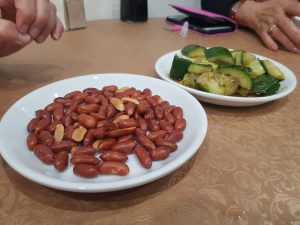