With the world in relative isolation, it’s the perfect time to be in control of what to eat and what to do. There are no social pressures to have a particular food or participate in a party. So with this in mind, I am now on a steak and eggs diet for a few weeks.

I can write up more about this in a future post about this experiment with steak and eggs but really wanted to do a quick post about my problem with “bone” broth. I don’t really know what to call it but it’s basically beef brisket + water. Not really bone broth.  It’s a Chinese or Asian soup and I make it in my pressure cooker. It’s a simple thing to cut up the brisket (about 500g to 1kg) and then fill the pot to around 80% and cook it on high pressure – I put it in for 99 minutes so I just set and forget. I have made it with tendon and I’ve made it with just the brisket. For the tendon I just buy 2 pieces and chop it up and then throw it in with the brisket. I only add the salt after I ladle out a bowl with some pieces of brisket.

I decided to embark on the steak and eggs diet as it would be simpler and more strict than if I just went with ‘carnivore’ which could (theoretically) include honey and cream. I already know I’m lactose intolerant and cream doesn’t really agree with me. Steak and eggs sounded simple, tasty enough and I really wanted some results as my weight was creeping up again and I never really lost weight on keto anyway (although there could be a number of different reasons for this).

Steak I decided could be any beef – which is why brisket was ok and I’ve also been having beef mince. My ‘steak’ of choice is scotch fillet at the moment although I’m really hanging for a cattleman’s cut / cutlet or rib eye (with the rib!)

Eggs are simple although I have only been eating chicken eggs and could have anywhere between 3 or 5 eggs per day.

It’s happened twice and I’m only up to two weeks of steak and eggs… it was so bad today it’s prompted me to write up my experience to help others AND also was so bad that I threw out the soup (I’m using ‘soup’ and ‘broth’ interchangeably)! (To throw food out as an Asian is sacrilege I know) I’ve also kept the brisket pieces for my dog and will ration it out to her over the next few days. I’m unsure if the brisket or the soup is to blame – most likely both.

Today it was clear to me that it was a problem. The first time I didn’t necessarily attribute it to the soup as I just felt bad and I didn’t know why. I actually thought it was some sort of carnivore flu although I did wonder why I was getting it considering I was transitioning from keto. I had thought maybe it was the lack of salt or maybe fat – I was just struggling to find a reason but had brushed it off.

So today I worked it out. It was lunch time. I had reheated a fairly large bowl of soup with 3 chunks of brisket in it and ate that first although I had also made 3 half boiled eggs. I ground some salt in it – some pink Himalayan salt as well as iodised sea salt! I drank the soup and picked out the two fattier pieces of brisket and ate those. Almost immediately I felt dizzy and a bit nauseous. That feeling like you don’t want to eat anything. I thought it was bizarre and was wondering if I was having a high blood pressure incident. I also felt that my heart rate had increased and that my brain was throbbing. The problem kinda stuck around for the rest of the day although I did feel a bit better and was able to eat my eggs (with salt of course) for my lunchtime meal.

Of course like any one else I use Google and search for “bone broth dizzy”.  Ah it looks like I may have a sensitivity. And this happens for long cooked meats in liquid. I actually think in this case it was the glutamate (yes this is the same word ‘glutamate’ that is part of MSG) and less so the histamine. Although the first time (last week) I had itchy eyeballs so think it was the histamine. So maybe it’s both?!

Interestingly there are a number of foods that have glutamate.  Including these ones:

Since I was on a steak and eggs diet it was easy for me to work out if I have had any of these.  Nope.  The only thing I had had through the day and the 24 hours prior on the list was bone broth and the meat cooked over moist heat for long periods of time – the beef brisket in the soup! 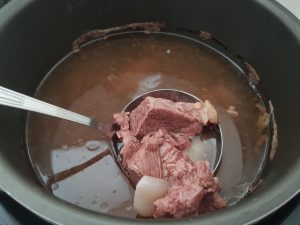 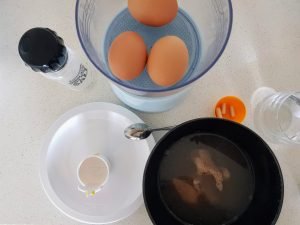 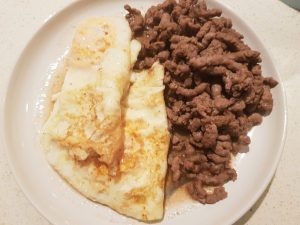 For dinner I had fried two eggs and some beef mince but stupidly hadn’t read the list carefully and decided to ‘try’ (for the first time in 2 weeks) to add some soy sauce to my beef thinking it wouldn’t matter.  I also sprinkled in some 5 spice – but that I had tried a few night’s ago and don’t think it affected me (at the time). Anyway the short story is – my gut didn’t like something. Within 2 hours I was on the toilet – my gut usually isn’t too bad at all so it was definitely something I ate. I’m assuming it was from dinner and not from the earlier brisket soup. Time will tell.

Could it be a histaime thing?

So turning to histamines it could be that too. Both times it’s because I’ve had the soup a few days later and histamines build up in the soup that’s been left either in the fridge or out (I had left it in the pressure cooker). And I did have those itchy eyeballs the other time. The first time in this steak and eggs period I didn’t sleep well, had lots of itchiness so at least this time I’m more aware. I have checked the list of histamine foods but none are really resonating with me as I have been so steak and eggs focused it couldn’t really be much on the list and I actually felt better when I ate eggs. The list I consulted is here – https://www.histamineintolerance.org.uk/about/the-food-diary/the-food-list/.

Could it be both?

I think so. The itchiness combined with the nauseous feeling and dizziness seems to indicate it was both.

The moral of this article is – no more big pots of brisket soup! Because I can’t have it in one sitting and don’t like the idea of freezing it, I think any ‘soup’ I make will have to me small pots and more quickly cooked rather than the long cooking.