What’s tasty, full of omega 3s, super keto friendly and easy to cook… and cheap?  Grilled Salmon Head!  And yes it’s very Asian.  I say this because I find many of my Caucasian friends horrified I would want to eat fish that looks like a fish let alone the head of a a fish.  I don’t know if other cultures also like fish heads but I do know we Asians love them.  Well I love them.

There’s a blog post from KitchenTigress I was reading in preparing this post which had a hilarious couple of lines about eating fish heads:

I have a great solution for people who don’t eat fish heads because they don’t like the eyes staring at them.

Eat the eyes first, then there’s nothing to stare with!

I was in Shishi Fujian China 石狮 (well away from any tourists or Westerners) over the 2019 New Year’s period and went to a local Japanese restaurant who happened to have this fabulous dish.  It was my go to when I went to that restaurant.  If it had a combination of vegetables there it would have been my perfect keto meal.

Here’s a pic of that wonderful dish from the menu at the restaurant: 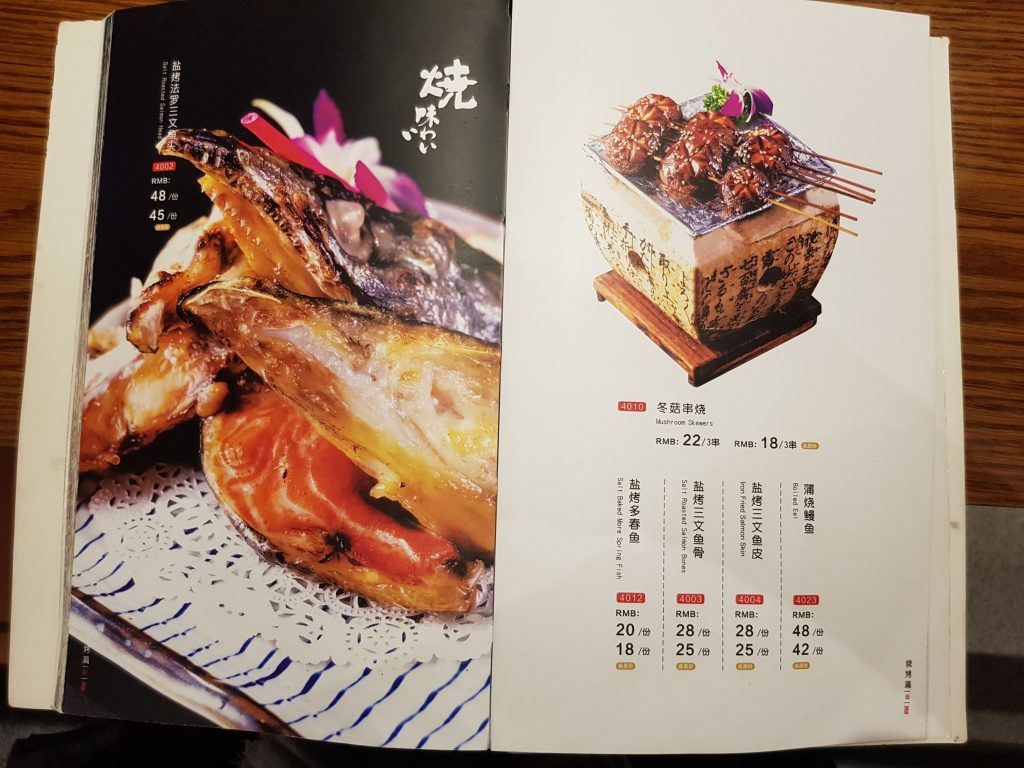 I thought I’d share the whole double page as all the options on this page would be considered keto friendly. Mostly it’s fish cooked simply.  Unfortunately I was so loving the salmon head I didn’t try any of the other options on this page.  The conversion to Australian dollars for the dish was about $10 so it was a great meal for the price. And one of the pricier options as you can see the salmon bones and the salmon skin would have been about 1/2 the price. 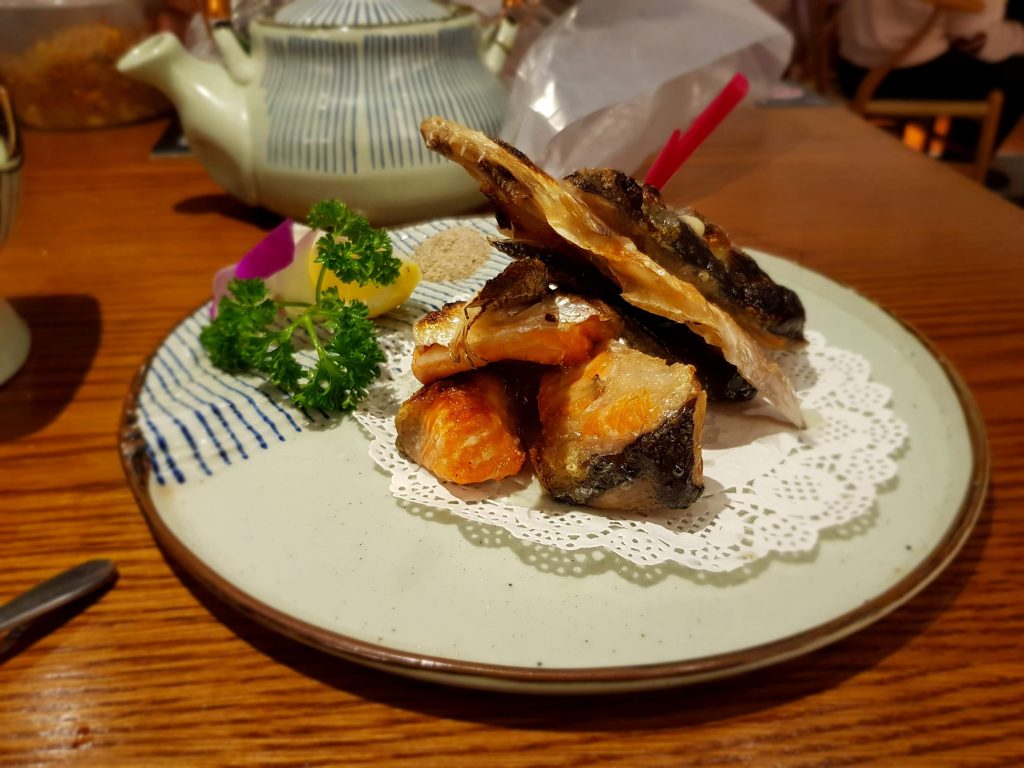 So yum!  The crisp skin, the succulent fish and fat that melts in your mouth.  And it’s so simple.  Just a bit of sea salt.  And possible a salt and pepper mix to dip into like at the restaurant.

What do you get when you go keto and you are Asian?

When I was back in Sydney that first weekend I went to the local fish monger / seafood market and bought a “salmon fish head”.  I should have thought to take a photo.  Mainly because you don’t just get the head.  You get the whole fish.  Minus the fillets.  So it’s the whole rack of fish with the tail and the head and the ‘body’ is the skeleton.  Told you I should have taken a photo!  Think of a cartoon fish that a cat has eaten. It looks like that.  Hmmm (5 minutes of googling later…) OK if there is enough interest I will take a photo another day and post it.

The price in Hurstville for this delicacy is a whopping … $3.99 per kilo.  Yes.  So cheap!  And the whole thing cost me around $5 or $6.  And makes me about 5 serves of the equivalent of the above picture.  Having said that I also get a lot of the ‘middle’ bits which aren’t the head and whilst it is still yummy has little flesh and lots of the main spine bit.  Assume you can get about 2 or 3 meals out of it if you wanted to somehow deal with the other parts separately.  I still love it all and cook it the same way.

Both times I have bought this I have asked the shop to chop it up.  Try and ask them to chop it up smaller as the first time I got it I still had to use my kitchen scissors to make smaller chunks. Smaller chunks gives you more bits (duh!) and also more crispy bits!

So how do you cook this?  Very simply.  Just salt and grill!  So easy!

I basically just wash the fish (I don’t even bother drying it beyond having it in the sink), put it on some foil (you may want to grease up the foil with some butter or olive oil but I just let the salmon oil do it it’s thing.) and sprinkle salt onto the fish chunks (and flip it around so there is salt on both sides).

Put it under the grill and grill it.  At some point I turn over the pieces.  It takes about 25 minutes for both sides.  Depends on how charred you want it and how close to the grill you have it.  I don’t have it super close.  You want to make sure it’s crispy so you can munch on the bones (optional!)

Here’s my cooked version with lots of en choy (aka Amaranth Greens). 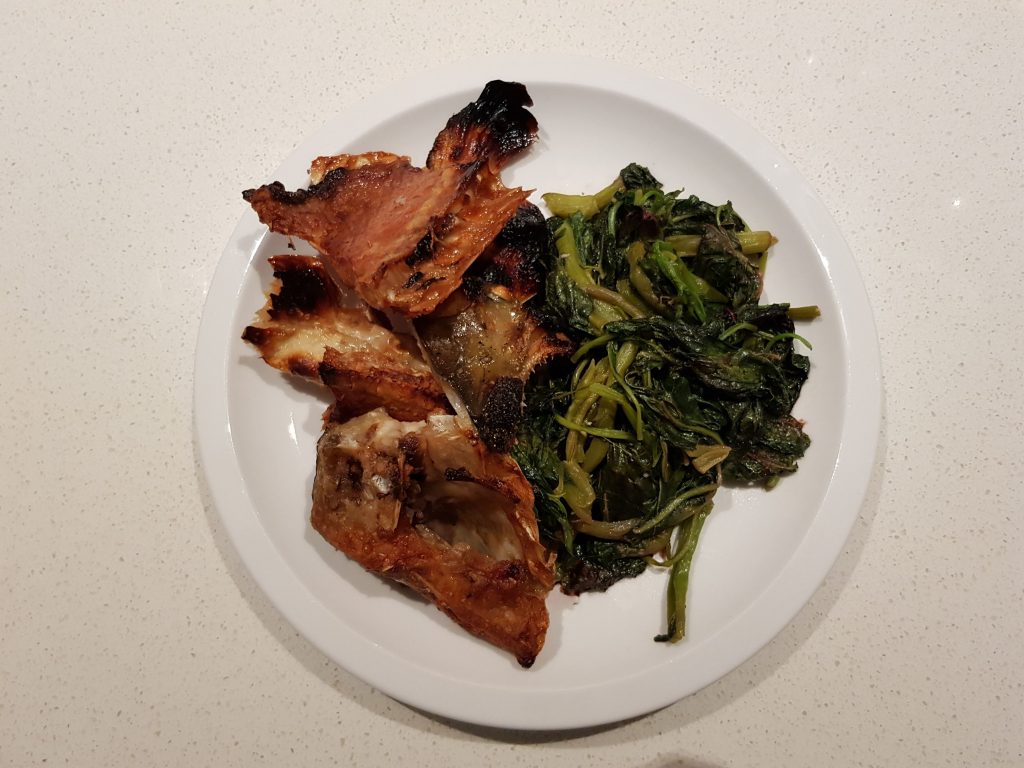 My mum can’t wait for me to cook this for her.  She has been known to travel to Chatswood to have a fish head soup just for the fish head (she can take or leave the noodle soup but since it comes with it she has the whole dish).  Now that she knows I can make it she’s waiting for me to cook it for her.  Oh how the tables have turned :).  (I prefer her cooking for me.  Thanks Mum!)

If you haven’t worked it out yet, I haven’t started putting any recipes on the site as that’s not the way I cook.  I’m more of a “get the gist of it” type of cook.  If you want a recipe follow the link at the top of the page or just google for grilled salmon head or 燒三文魚頭 (Chinese) or 鮭カブト塩焼き or Sake Kabuto Shioyaki (Japanese).  I’m not sure what other cultures cook this but the fried version I know Malaysians and as much as I love that version it’s dredged in flour and that’s a no-no for ketosians.  (Yes I just made that up).