I made ice cream and made people taste it as a test.  I used my 4 ingredient egg white recipe and made matcha green tea ice cream. And it was a hit!

I’ve made the matcha green tea ice cream a couple of times using my Granny’s keto egg white ice cream recipe.  And both were great.  I upp’d the amount of green tea this second time and it was probably the most I would go.

The ingredients are simple.  And no messy making a custard!  I’m wanting to try the same recipe base but instead of sour cream using yoghurt next time.  Not sure if it will work but it should do. 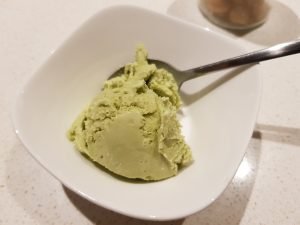 The first time I made it, I served it at my Chinese New Year dinner.  We had steam boat / hot pot and dessert was ice cream.  I actually made two keto ice creams for that evening – green tea (matcha) and black sesame ice cream. The two recipes were different.  One was using the egg white recipe and the other was a traditional custard base.  And it was obvious the egg white/granny one was superior!  And I think I’ve hacked it now so that it’s the best possible and simplest possible.  I’m now using egg white… out of a carton!  The egg whites are good because I am able to freeze what I don’t use.  I just measure it out and pop them into zip lock bags and defrost them in the fridge overnight.  And get them back to room temperature for whipping.

So onto the recipe…

In my initial batch I used some cream of tartar in the egg whites to try and get them to form soft peaks (due to an egg yolk issue).  It didn't matter.  The ice cream was super creamy and easy to scoop!   Strangely enough it wasn't 'freezing' very well either so I'm not quite sure what caused that but it does mean I get to make another batch of ice cream soon to test it out! 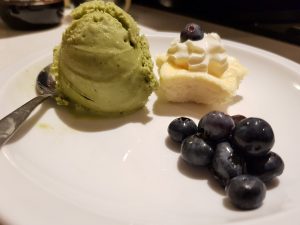 You may be wondering why the other coloured ice creams in the main picture — we also tested out commercially available ice cream which is mostly keto friendly – Fropro salted caramel ice cream and Halotop Cookies and Cream.  The matcha was the favourite and tasted like ‘real’ ice cream. 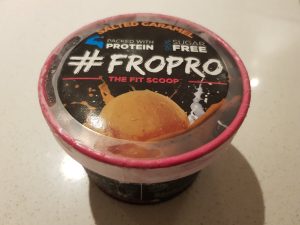 Stay tuned to a future post where I review the Fropro Salted Caramel Ice Cream!