My go to Chinese meal for keto is duck. Mainly because it’s easy to go to a Chinese BBQ place and just get a “duck and rice” and just ask them to hold the rice. Often the person behind the counter will give me more Asian greens to compensate. I also need to remember to make sure they don’t put the ‘sauce’ on.

The lovely serving people do often double check to make sure I don’t want any rice and not even “a little bit?”!  I’ve come to accept that as a sign of courtesy as it’s just not something they are use to. It’s common across any restaurant really when I don’t ask for rice. My mother has been a diabetic (and still is – Type 2) so for many years pre-keto I was use to going without rice or maybe one bowl between the ‘rest’ of us. We all knew that rice wasn’t that great to eat so much of but now that I’m keto I want to stay keto.

So no rice. I have yet to make an exception for rice and surprisingly still don’t miss it. At the time of writing this post I’m about 3 month’s into the keto lifestyle. So not super long but long enough to feel the great benefits of being in ketosis. The scales haven’t shown much progress (about 3 kg or about 7 pounds) but I can tell by the fit of my clothes and even the progress photos (which get hidden away!) that I’m getting slimmer. Compliments always help the progress too! 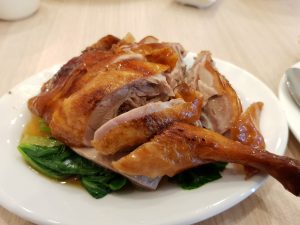 Easy eat out meal or take away

There’s nothing better than a quick meal out that is delicious and easy to access and happens to be keto! Whilst most options from supermarkets is either roast chicken or deli meats or salad, my go-to is Chinese BBQ.

The shops often scare non-Asians or gweilo or gaijin with the hanging whole ducks (complete with heads!) and slabs of roast pork or BBQ pork. I understand it’s mainly due to the heads that are hanging in the windows. For that matter, I can’t imagine the offal options being appealing to non-Asians either. Hmmm…

Near work, I’m close to Chinatown so I can easily get access to Chinese roast duck or roast pork, or white cut chicken or any of those other things which would probably be keto too. I’ve sometimes bought some pork intestines or beef tendon as a take away option. Other delicacies which could just totally turn you off include pigs nose, pigs trotters and pigs ears (and let’s not mention the pigs blood). Squid, chicken and duck feet and Chinese Sausages are other options often in a Chinese BBQ store. 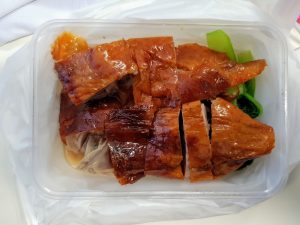 My outright favourite option is definitely roast duck!  Crispy skin, lovely texture of the meat and the five spices and saltiness are great. There is also some sweetness but I’m assuming it gets roasted off (sometimes ignorance is bliss!). Ordering it at a BBQ place as a ‘meal’ is great. The pairing with Chinese greens is almost perfect (best if they give you a few extra pieces) once you give up the rice (and no plum sauce for you!)

The meal has plenty of ‘natural’ fat, protein and you get your vegetables too!

Take away or eat in, either works well for your keto diet. It works for me! And is just so delicious and yum! 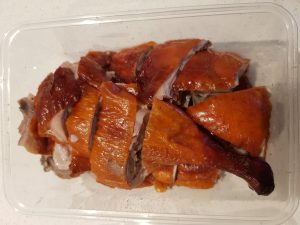 From a Chinese BBQ place you can even order a whole duck or half a duck and have the person there chop it up Asian style.  I know how to chop it myself but it’s easier just to get them to chop it.  Just make sure you ask them to hold the sauce.  They often give you a take away container (small round one) of plum sauce.  The sauce has a LOT of sugar.  Don’t do it!  Even if I forget to get them to not give it to me I seem to end up bringing them home.  But as long as I don’t eat it we’re still OK 🙂  Phew!.

I haven’t worked out the carbohydrates or carb count for the duck as most of the websites seem to report 0g of carbs. Somehow I doubt it as there is a bit of sweetness to the skin of the duck. So assume there are a few at least but all in all it’s a great low carb, high fat, medium protein food.