What’s delicious creamy, slightly sweet, low carb and good for you?  Yes!  Coconut yoghurt is all that!!!

Why no dairy milk?

I can have dairy to a point so it’s not a must have item for me but I am somewhat lactose intolerant.  I’ve never been diagnosed but when you have had too much milk and awful intestinal issues (in my case it was too much gas and it was so painful) you know.  I can probably have up to a glass of milk a day and be ok but at the time I was into protein drinks mixed with skim milk.  Yep how the tables have turned!

I use to just use up my lactose quota on ice cream 😉  that part hasn’t changed much!

So back on the coconut yoghurt!  I love it more than normal yoghurt.  It could be that it’s slightly less tangy or that the consistency is a bit thicker or it could just be the slight sweetness to it.

The way I tend to have it is as a dessert.  Straight after dinner so it’s not a separate meal.  I don’t tend to have any breakfast unless I’m having it as a social meal or have it as part of my hotel stay where breakfast is included…

My dessert coconut yoghurt is easy! I put in a couple of heaped tablespoons of coconut yoghurt in a bowl then throw a few berries on top, maybe a sprinkling of cacao nibs and some nuts.  Either flaked almonds or whole hazelnuts or even macadamia nuts.  Or pecans.  Basically whatever takes my fancy.  And then voila there is my dessert.  So yum!!  As much of an ice cream person I am I love this almost just as much!  And this is much easier to access if you have coconut yoghurt.  Even if it’s hard to get (I’m currently typing this while in Japan and they don’t have coconut yoghurt here unfortunately) you can always make your own!  See below for an option to do just that! 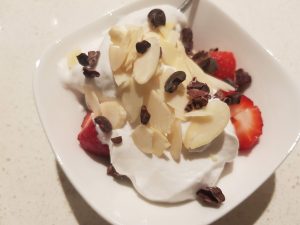 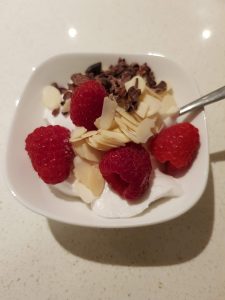 I’ve mainly tried two brands which are commonly available in Australia.  There are more options than two but the two I’ve tried are Coyo Organic and Aldi’s version – Yoconut.  Mainly I chose these for the carb count as it’s lower than normal greek yoghurt.  Yes! 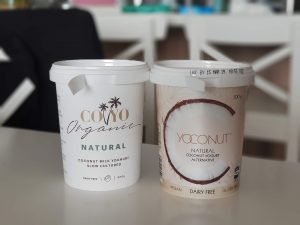 The main difference is the price!

The standard price for these are:

The Nakula version I would give a miss as it has cane sugar as one of the ingredients.

I tend to buy whatever is available depending if I need it and if I’m in Woolworths or Aldi.  But when I do go through Aldi I always look.  If you get a short shelf life version (ie discounted!) it’s only $4.89, so watch out for the stickers my friends!  I can smash through one in a couple of days.  And can always make frozen yoghurt. (I also find that the shelf life is longer than what the expiry date seems to indicate).  I hadn’t noticed the Cocobella one – maybe it’s sold out when I go to Woolworths?  Anyway it will be on my radar when I next go through.

I like it so much I thought I should see if I can make my own (thinking I would just use some old yoghurt and transfer it to a new pot of coconut cream – that could work but I am not talking about that…)  There’s a simple recipe of using a jar of coconut cream and a capsule or two of probiotics!  I gave it a go but wasn’t that enamoured with the ‘success’ so I may just have to leave it to the experts and create more environmental damage by buying containers from Aldi and Woolworths.

You can get the recipe from the Minimalist Baker – https://minimalistbaker.com/easy-2-ingredient-coconut-yogurt/

Here are a few photos of my attempt (the jar was from a friend who gave me a kefir kit!) 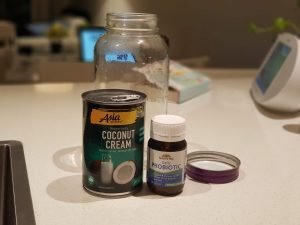 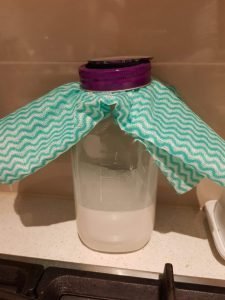 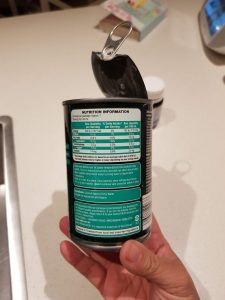 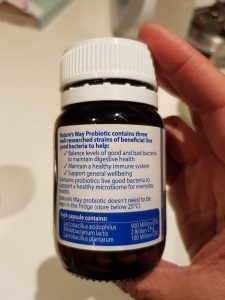 Coconut Yoghurt – yum, dairy free, vegan and keto friendly!  I think it may even be paleo 🙂