I had been to Japan in the past for work but it would be close to 20 years ago!  While I know I can do sashimi, yakitori and shabu shabu for food here I was still a bit apprehensive about staying in ketosis whilst on a holiday.

I don’t think I need to fear.  Although my first day here was on my own so I have a lot more freedom to choose what I want to eat and when I want to eat.

But doing a bit of exploration today and looking at packets it looks like we’ll be keto’ing it whilst in Japan!  I’ve always been a bit wary about committing to sticking to keto whilst on my holiday (vacation) but was going to do my best.  I just didn’t want it to be about “can’t moments” as it’s not like I can be in Japan every day!  The good news is that Japanese types of food I seem to enjoy can be found in Australia.  Even the best ever tempura or katsudon won’t sway me.  And the good thing is that their sweets are relatively temptation free.  Even my most loved mochis won’t be that tempting as I prefer Malaysian or Taiwanese mochis.

On day 1 I got into Narita airport fairly early and caught a train in (thank you Google maps!) and walked to my accommodation – the room wasn’t ready which meant exploration time!  One of the places I checked out was the convenience store – 7 Eleven in this case.  And my most precious find was the creamer.  Whilst you are probably thinking about either the Coffeemate version or the version you can get with MCT oil this is little UHT like mini cups of milk.  But in this case they are cream(er)!.  Unfortunately I don’t read enough Japanese to work out what the ingredients are but I’m sure I wouldn’t like them anyway so I’m going to plead ignorance.  I only bought one packet (18 little guys inside).  Each little container is only 0.3g carbs!!  Woohoo!  Means I don’t need to have black coffee every time.  Especially since these are so portable.

This are the key characters you are looking for when looking at a nutritional panel: 炭水化物 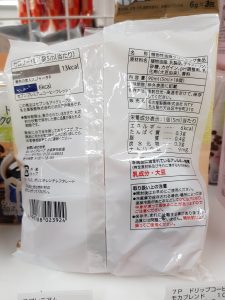 Did you spot the magic words on the packet?  Yep 0.3g of carbs.

As an aside if you want to learn what each of the nutritional panel line items means – here you go courtesy of the Savvy Tokyo site:

Other wonderful finds from the first day is that there are places that have “hamburg” meals which basically is a deconstructed hamburger — as in they already are bunless burgers!  How good is that!?!  But I suspect the sauce is very keto unfriendly so I need to work out a way to make sure they understand “no sauce”.  I’ll see if I ever need to eat one of those meals although with so many other options I don’t know if I will ever get to try one on this trip! 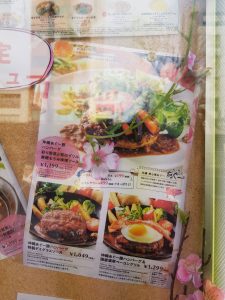 I went to Ueno Park to spend some of the time I had before I was able to check in and since it’s a bit of a tourist destination there were many small food stalls selling all sorts of treats.  There are a few keto friendly ones as well especially the ones that sell meat on a stick.  The smell of BBQ meat is fantastic. 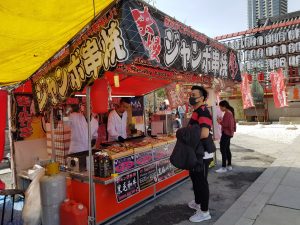 One stick of belly pork was very satisfying!  The pic I have was postponed till after I ate one chunk of it.  Tasted like a mild bacon and were very thick chunky pieces.  I asked for it to not have extra sauce of any kind although I’m sure it was basted in some sauce. 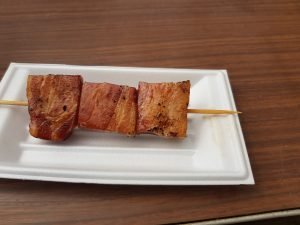 There were a number of options of meat there but I thought the pork belly would have a better fat ratio. 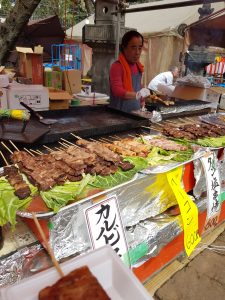 In the evening I ended up going to a restaurant and ate at the counter, some very delicious grilled “fatty salmon” (their words not mine!) and some cabbage with anchovies.  It was absolutely delicious.  And all for a princely sum of about A$17.  I actually was confused as to how the charges worked, but it wasn’t too expensive so I just left it rather than trying to work out why I had 3 items on my receipt and not two. 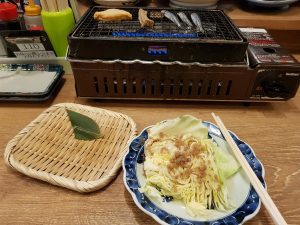 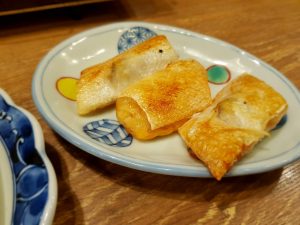 The anchovies and two bits of …. fish cake? … fish tofu?  (unlikely to be super low carb!) were meant to be BBQ’d so I did that on the countertop BBQ in front of me.

Check out the gallery to see some of the convenience store items which I found too!